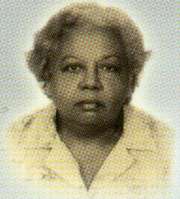 When we think about the great Spiritist Educators in Colombia, we cannot help but think of this great woman, who was not only an educator, but a pioneer of the Spiritist philosophy in our country. Having great tenacity and drive, she was able to take the Consoler to different regions of our country, no matter the distance or the means of transportation, which often were not very comfortable. Due to the abnegation in her work, it is thanks to her that many Colombians today have the knowledge of Spiritism.

Doña Ana, as we all knew her, was born on March 24, 1916 in the city of Cartagena. When she was 15 months, her mother died,  leaving her with great nostalgia for her mother throughout her life. She was raised by her grandmother Dominga Padilla.

She married Henrique Luis Cardona Iriarte and they had 10 children. She studied at the Colegio Nuestra Señora del Carmen where she graduated with a Teaching Diploma on November 7, 1934 in the city of Cartagena. The Directors of the Bolivar Department of Public Education certifies that she worked as a teacher and principal of different educational institutions for 28 years.

She became acquainted with the Spiritist Philosophy around 1973, by special invitation of a retired friend, Carmen Peralta de Gómez, at Rosa Cifuentes’ home, where the Spiritist Center Unión Fraternal was located.

She founded, with 35 members, on January 7, 1974, the Spiritist Society of Cartagena SEC, where she was the president for approximately 18 years, and held, among others, the position of  mediumistic director.

From Catholicism teacher and practice to teaching and living the enlightenment brought by the Spiritist philosophy, she offered her home, her time, her abilities, her efforts and her love to the Spiritist Cause.

She devoted the last 30 years of her physical life to the teaching and dissemination of the Spiritist movement throughout the Colombian country. She attended and participated in international Spiritist events in Brazil, Argentina, Guatemala and the United States of America, among others. She was the president of the Colombian Spiritist Union – UNESCOL in two consecutive periods. During that time, she became actively involved with various leaders and representatives of the International Spiritist Movement. During her last trip to Brazil, she had the joy of personally meeting the unforgettable Francisco Candido Xavier.

Her Spiritist knowledge and her teaching expertise made her a great writer, speaker and lecturer, having repeatedly written articles and poems of Spiritist content. Her spirit, always willing to study and research and her discipline and strong willingness to work, gave her the characteristics of an innate leader, both in her work as a teacher and in the spiritual field.

As a serious, responsible, jovial woman, who worked tirelessly fulfilling her commitments with Jesus and Kardec, she developed a chronic eye disease, which led her to gradually lose her vision, until she became blind, a circumstance that did not stop her from continuing to perform her tasks, fulfilling her duty and commitments with the Consoler.

Only when her knees began to fail, her presence and physical activity declined until her death on August 9, 2003 in her residence, returning calmly and happily to the spiritual world.

It is worth mentioning the words of the presentation by Ana Fuentes de Cardona in Maracaibo, Venezuela in December 1978.

“There is a pressing need to give to the children entrusted to you, a true Spiritist education, in the clear concept of harmonization of the spiritual faculties. To achieve this double purpose, you must follow the unique and wise teachings of the Christ, of that Christ that must live in us, to nurture faith filled with sensitive and acting attributes, which give the spirit the necessary support to achieve balance and improvement, with the conviction that it is necessary to be better each day than the previous one and providing suitable instruments to achieve it.

The mentality properly centered on the yearning for renewal is found in the spirit”.

“The money invested in education is more productive than the one invested in armaments because it is a better arsenal of moral and intellectual weapons that guarantee the sovereignty of a nation. Those that water the beloved land with blood, subjugate freedom and obscure the feelings of so many people who could be living supporters of fraternity and justice”.