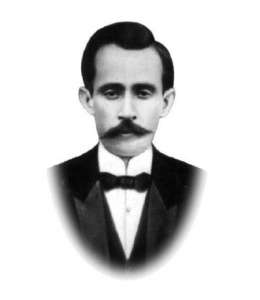 On May 1, 1880, Eurípedes Barsanulfo was born in Sacramento, Minas Gerais, Brazil.

He was the third child, of the thirteen, in the family. His parents, Hermógenes Ernesto de Araujo, also known as “Sir Mogico” and Jerónima Pereira de Almeida, also affectionately called “Lady Meca”, did their best to raise such a large family.

His childhood was not easy, despite the efforts of the parents to raise them, the family’s daily diet was deficient, and his mother suffered, since the birth of one of her daughters, recurrent crises that brought her great suffering.

His first studies were in the primary school of Sir Joaquín Vaz de Melo Júnior, known as “Tatinho” and in 1889, when the “Colégio Miranda” was founded in the city, directed by Professor Juan Derwil de Miranda who later collaborated, as an educator, with Barsanulfo at the “Liceu Sacramentano”.

From childhood, his vocation stood out and, as in the case of Kardec, he was immediately promoted to the advanced class, assuming many times the role of monitor and assistant to the teachers, thus initiating his first pedagogical activities. Eurípedes remained in that Institution until 1901 and there he created his own didactic processes in Portuguese Language and Natural Sciences, which became the foundations of his pedagogical processes.

Between the ages of 12 and 13, he founded the “Grêmio Dramático Sacramentano”, where, in the expression of poetic and theatrical art, he demonstrated great intellectual capacity. He acted in several pieces, mainly with a Christian orientation, anticipating his concern with the need to implant new directions for humanity.

It is in 1902 when his father takes him to Rio de Janeiro. His goal was to enroll him in a medical school and also find a job. He got a place in the School of Medicine of the Navy. However, on the eve of his departure, “Meca”, his mother suffers a crisis. Believing that she would not resist the separation of his son, Eurípedes decides to unpack his suitcases, giving up his admission to the School of Medicine.

Not being able to do university studies, he began his stage as a self-taught person, thus showing his great will and his resilience in the face of difficulties.

He was an avid reader and each reading awakened in him the cultured and noble Spirit that was in him, managing to possess a wide and amazing culture.

It is also known that he created, with his own resources, under the guidance of the spirit of Bezerra de Menezes, a small homeopathic pharmacy, “Farmácia Espírita Esperança e Caridade”, in which he served the neediest in his city.

This is how he earned the trust, respect and admiration of all, developing in him a deep love for his fellow men.

At the age of twenty-two, he already proved to be an innate teacher and highly esteemed by colleagues and students.

On January 31, 1902, Eurípides founded the Liceo Sacramentano on his initiative, which had a team of highly competent partners with a profound love for education, an education that would reveal itself without antecedents in its time. Inspired by their teacher, the students created an assistance service, the “Sociedade dos Amiguinhos dos Pobres” (Friends of the Poor Society), that promoted different initiatives and donations to comfort and help those most in need.

In a short time, the word of the Lyceum spread and reached other cities, whose families sent their children to study in Sacramento.

Euripides soon created his own pedagogical process, using Art, since he saw in Dramatization a way to moralize the social environment, through the psychological processes of imitation, which identified the characters with the public. In his methods we find the influence of Pestalozzi, Kant, Spencer. He was, without a doubt, a dedicated soul, from previous eras, with the commitment to Education. Educating souls was his goal.

He knew how to combine, pedagogically, experience as an indispensable resource for learning, fleeing from the concept that governed in the learning age by simple contact with books. Thus, it included innumerable practices that favored moral and emotional learning, the formation of affective attitudes, proposing to modify attitudes and habits.

It is at the beginning of 1903 when he has knowledge of the Spiritist Doctrine through his uncle Mariano de Cunha, medium. His uncle later hands him a copy of the work of León Denis, After Death, feeling inevitably attracted by the wonderful literary style of the Apostle of Spiritism.

It was in 1904 when he attended a Spiritist meeting in Santa Maria. That day Euripides heard from the mouth of the medium Aristides, the “most extraordinary philosophical-doctrinal dissertation that he had ever known, in all his life, on the luminous discourse of Jesus.”, In response to a question he had asked mentally about the Beatitudes. At the end of this communication, the Spirit reveals his identity: he is John the Evangelist.

A few days later, he returns to Santa Maria and receives a message from Vincent de Paul who reveals himself as his Spiritual Guide and invites him to create another institution, whose base – he tells him – will be Christ and whose spiritual director will be me and the spirit commander, will be you. In addition, Vincent de Paul alerts him to the loneliness, misunderstanding and hostility that he will suffer from now on.

It is then that, due to the accumulating circumstances, they have to leave the old Lyceum and resume teaching in a room made available to Euripides. At that time, he decided to add the study of the Spiritist Doctrine to the teaching curriculum, a decision that did not have the support of parents, mostly Catholics, who decided to withdraw their children from the institution.

Feeling abandoned by everyone, he receives a small spiritual message: “Do not close the school doors. Remove the sign of the denomination ‘Liceo Sacramentano’, which is a glimmer of human pride. Instead, put the name: Allan Kardec College. Teach the Gospel of my Son on Wednesdays and start an Astronomy course. I will cover the Allan Kardec school with the mantle of my Love.” Mary of Nazareth.

This is how the Allan Kardec College was born in 1907, the first school, with an eminently Spiritist curriculum. In it, Euripides teaches Spiritism as enlightening truth.

THE EDUCATIONAL PROPOSAL OF EURÍPIDES BARSANULFO

The key to the foreseen reform in Humanity is its regeneration. A process that can only be done through Education. An education that has to reach, in a broad way, the various nuances of being and that requires the mobilization of all sectors of society.

Understanding these issues, Eurípides Barsanulfo’s educational proposal is highly inclusive and dynamic, attentive to the complexity of being, to the structure of the spirit: brain and heart, intellectuality and sensitivity, reasoning and emotion. True education, then, will have to attend to these peculiarities in order to achieve its main objective of shaping the man, the new human being, the basis of society that will transform itself.

We can then summarize Eurípides Barsanulfo’s educational proposal as a valid and current proposal, suitable for the third millennium, on five fronts of action:

Education-Instruction: formation of the individual as a citizen and social agent capable of influencing and modifying their environment. The study of the arts, the addition of sports and games, are of capital importance for socialization, learning, the implementation of collaborative values, solidarity, respect and inclusion.

Social Education: the need for a more humanistic pedagogy, focused on the needs of the student as a human being, attending to their way of being and feeling. Each being is unique and with potentials that differentiate it from the rest. Hence, the importance of envisioning your potentials, helping you discover them and put them at the service of your personal growth and of society in general.

Education for GOD: the Education would not fulfill its role if it did not move towards the union of being with the Creator.

Helping people from childhood to understand that they are essentially spiritual beings, not being able to forget this filiation with God. We are not just the bodies we see, but eternal spirits destined for perfection and responsible for our actions.

Education in the Home: This is an essential front for Education that promotes the transformation of society.

Self-education: the necessary intimate reform that requires evangelization, in the sense of the work of acquiring, based on the maxims of Jesus, a conduct that exemplifies love, forgiveness, charity, benevolence, and, ultimately, everything that makes us good men and women, which, without a doubt, will result in a fairer, freer, more loving society.

It is November 1, 1918 he returns to the Spiritual Homeland, leaving behind this great educational legacy, And according to the news received from the spiritual plane, there he directs a great institution, HOSPITAL ESPERANÇA, with the purpose of educating and preparing spirits for the objectives of the Third Millennium.