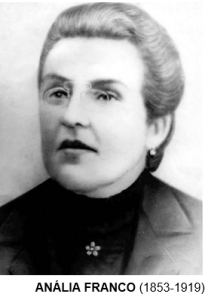 Anália Emília Franco Bastos, mostly known as Anália Franco, was born on February 1, 1853, in the city of Resende, in the state of Rio de Janeiro. She died on January 20, 1919, in the city of São Paulo. She was a journalist, writer, poet, and an excellent educator who left a legacy of love for others and tireless work for the good, an example of abnegation and true charity.

She started her path in education at the age of 15, when she studied to be a teacher and helped her mother, who was also a teacher. She lived in a time when society exploited black people and women had no voice.

In 1871 the Lei do Ventre Livre (Law of the Free Womb) was approved, which proposed freedom for children born to slave mothers. Still, these children would be under the guardianship of the slave masters until they were eight years old, which resulted in abuse and mistreatment, and then the children were abandoned and left to their own devices. Touched by this situation, Anália Franco began her social work by writing letters to the women farmers, asking for help and support. Then, she created a place to shelter these children called Casa Maternal (Maternal House).

This first place was given free of charge by one of the farmers Anália had contact with to ask for help. However, the condition imposed by the farmer was that blacks and whites should not be mixed. Anália refused and started paying rent for the place to serve underprivileged children without racial distinction. Not pleased with Anália’s decision, the farmer used her resources and her husband’s influence to force Anália out of that place.

Faced with this situation, Anália went to the city of São Paulo, where she rented a house with her own money, which was half of her salary as a teacher. However, she did not have enough resources to feed the children, so she went to the streets to ask for help.

Anália Franco dedicated a significant part of her life to socio-educational activities for children, mainly black children of slaves. However, she expanded her social projects and helped working women, the poor, the marginalized, orphans, and the needy.  Anália believed in liberating education. She tried to empower those she helped by giving them professional and educational training so they could grow and  (re) build their own lives so that they would be an active part of society again.

Anália Franco collaborated with several newspapers and magazines from several cities and Portugal. On April 30, 1898, she created her own magazine entitled “Album das Meninas” (Girls’ Album), published monthly and aimed at young Brazilian women. It had a literary and educational nature, with most of the content produced by Anália herself, who also received help from other collaborators.

The magazine ran until 1901 and was a way to encourage education, especially for girls, because Anália used this medium to appeal to parents and society for women’s education to go beyond learning how to read and write and ask for support for public education.

On November 17, 1901, Anália Franco inaugurated the “Associação Feminina Beneficente e Instrutiva do Estado de São Paulo” ( Beneficent and Instructional Female Association of the State of São Paulo). It aimed to support, instruct and educate poor children and eradicate illiteracy, poverty, and ignorance of the less privileged. According to her own words, the Association “does not aim only to support and educate the poor; it has a higher purpose; a holistic idea of gathering all intelligent and good-willed ladies to work with a common goal for the social good.”

Even though she was a spiritist, Anália never wanted to show this nuance in her work and projects. Instead, she welcomed children of different beliefs and wanted to teach the fundamental truths of any religion, such as the existence of God and love for one’s neighbor.

Anália was an example of dedication and firmly believed in the power of education. With her speeches, she tried to convince other people, especially women, that the Brazilian nation would only have a better future through children’s education. She used to say: “Let’s educate and support the poor children who need our help: pulling them from the paths of vices, making them useful and worthy citizens for the advancement of our Homeland.”

She had about thirty nursery schools in São Paulo under her supervision, senior homes, daycare centers, and other schools in 24 different cities, adding up to about 70 institutions. Anália dedicated her life to fulfilling the need and quality of the work in these loving and welcoming homes.

Analia had to overcome many difficulties when resources were scarce due to World War II, where she could hardly count on any help from the government. She held several events and, for a while, relied on the support of friends and collaborators. After that, she started to go around the cities with the “Regente Feijó” Female Band and the Music and Drama Group of the Colônia Regeneradora  “Dom Romualdo” (D. Romualdo Reform Colony), both founded by her, to get donations for the Association, always with the help and support of her husband Francisco Antônio Bastos.

Another calamity would appear despite all these efforts, reaching Brazil. The “Spanish flu” pandemic began in Europe, and in 1918 many people died in São Paulo.

Without the physical strength to go on, after all the efforts and anguish she endured to take care of her beloved children, Anália passed away on January 20, 1919, in São Paulo.

She was a delicate soul, pure of heart, dedicated, humble, patient, and loving. She was a faithful servant of Jesus and built a vast spiritual family. She had no biological children but hundreds of children of the heart who called her mother, and all her work was dedicated to the Father of Endless Mercy.

She left a legacy of love and as an exemplary educator. She wrote a few novels, collaborated with several magazines and newspapers, inspired thousands of souls, and continues to be, until today, an unforgettable personality.

Anália Franco believed that “besides the thought and word of God, there is nothing more beautiful and noble than the mission of the true educator of children.”