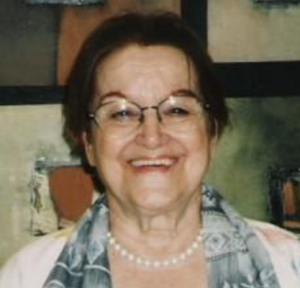 Professor Cecília Rocha was born on May 21, 1919, in Porto Alegre, State of Rio Grande do Sul, Brazil and disincarnated at dawn on November 5, 2012, at the Santa Marta Hospital in the city of Brasilia, at the age of 93.

She studied until completing her teaching degree. She followed advanced courses in the teaching area and was appointed to practice teaching in 1940.

From 1946 on, she served as a school director. In 1976 she graduated as a Bachelor of Pedagogy specialized in School Administration and was appointed in the same faculty where she studied – which currently belongs to the University of Porto Alegre – as an adjunct professor of the Department of Didactics.

In 1955 she received, by clairvoyance and mediumistic inspiration from the Ángel Aguarod Spirit, the complete program for the Preparation Course for Spiriritist Educators.

In that same year, the course was taught for the first time at the headquarters of the Spiritist Institute “Amigo Germano” with the participation of 55 people, some of them from towns in the interior of the state.

In 1958 she participated in the “Fellowship of Spirit Youth of the North and Northeast of Brazil”, in the city of Teresina, an opportunity in which she met Divaldo Pereira Franco and Juan Antonio Durante.

Divaldo Franco invited her in 1960 to work as a pedagogical advisor for his school in the “Mansão do Caminho” (Salvador, Bahia, Brazil), a work of social assistance and spiritual promotion of the Spiritist Center “Caminho da Redenção”. Cecília settled for ten months to carry out this work.

From 1961 onwards, the course was spread throughout Brazil, always with the presence of Cecília as the promoter, accompanied by collaborators from various states who gradually committed themselves to this call.

In 1975 she began to work at the FEB (Brazilian Spiritist Federation) in the Department of Children and Youth. In 1976 and 1978 he psychographed messages signed by the Spirit Ángel Aguarod, within the FERGS, which gave rise to the birth of ESDE (Systematized Study of the Spiritist Philosophy).

In July 1980, already retired, our dear sister moved to Brasilia in Brazil, invited by Dr. Francisco Thiesen, president of the Brazilian Spiritist Federation, in which she served as Director (1980-1982) and Vice President (1983-2012).

For 31 years, this noble Spiritist worker dedicated herself to the organization and development of the Spiritist Philosophy Study Area, especially in aspects related to the Spiritist Education schools for children and youth, as well as Spiritist study for adults.

Together with María Cecília Paiva, she developed and implemented the Campaigns for the “Spiritist Children and Young People Education” and the “Systematized Study of the Spiritist Philosophy” (ESDE). Promoted countless training courses and seminars for workers in these areas throughout the country and abroad.

Cecília Rocha is the author and organizer of numerous Spiritist books for children, published by the FEB, and author of the book “Pelos Caminhos da Evangelização”.

In 1983 she traveled to Argentina, to participate in the celebration of the anniversary of the Argentina Spiritist Confederation, together with a delegation chaired by Dr. Francisco Thiesen, president of the FEB, and also composed of Divaldo Franco and the Spiritist educators Nélia Salles (Bahia, Brazil) and Elaine Ramazzini (São Paulo, Brazil). On the occasion they presented the “Systematized Study of the Spiritist Philosophy” (ESDE), simultaneously with its launch in Brazil.

The Argentinian Spiritist Confederation (CEA) assumed responsibility for the task of translating into the Spanish language the course prepared by the FEB (Brazilian Spiritist Federation), consisting of six volumes referring to the Basic Works of the Codification of Allan Kardec.

This was followed by the children-youth Spiritist Education courses (ranging from kindergarten to adulthood); the Study, Education and Practice of Mediumship, the Fundamental Study (on two levels) and Complementary Study of the Spiritist Philosophy, all of them translated under the responsibility of the CEA, and disseminated throughout the Spanish-speaking world.

Finally, always with the coordination of Mrs. Rocha, the FEB launched the Advanced Study of the Spiritist Philosophy (EADE).

In the first days of March 2007, Mrs. Rocha was again in Buenos Aires, invited by the CEA, for the inauguration of the annual activities of the Spiritist Institute of Education. In addition, she offered a dissertation on “Unification” in the Federal Council of the CEA, and a conference in the Association “The Fraternity.” On this visit she was accompanied by Mrs. Maria Túlia Bertoni, then President of the Spiritist Federation of Mato Grosso do Sul (Brazil).

Cecília adopted as a commitment of life, body and soul, with mind and heart, the primary task of Spiritist education.

Her thought: “Referring to supreme freedom without associating it with the unconditional practice of good is like sowing in sterile soil. The ideal of freedom that must permeate the educational process requires moving along with the practice of good. History is replete with proclamations of freedom that were followed by terrifying massacres. For this reason, those who educate must teach the value of freedom in the light of the permanent practice of love for the neighbor. Freedom – practice of good: an effectively liberating binomial” (Paragraph from “Pelos Caminhos da Evangelização”, by Prof. Cecília Rocha).